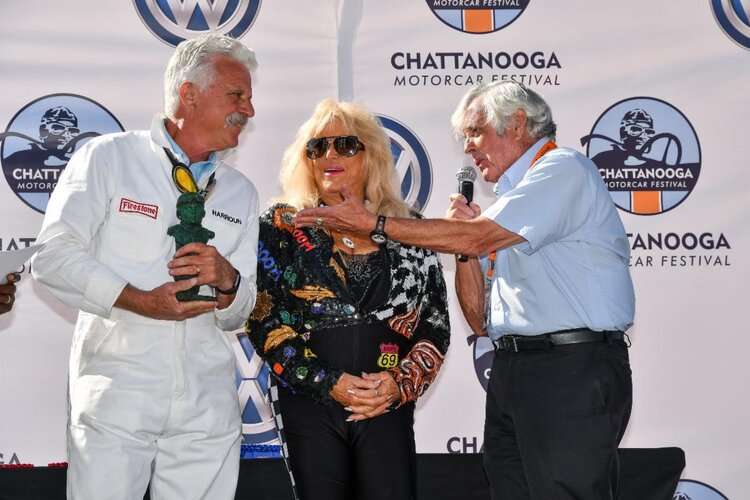 Joseph “Corky” Coker has been named the Grand Marshal for the 2021 Chattanooga Motorcar Festival. At the inaugural event, in 2019, Coker was recognized as the Festival’s “Honored Collector.”

Racing legend Brian Redman, the inaugural 2019 Grand Marshal, returns to this year’s Festival as Grand Ambassador of the Festival.

The 2020 Festival, originally scheduled for Oct. 16-18, was postponed until Oct. 15-17, 2021, due to pandemic restrictions. The Festival will return this year with an even more dynamic schedule of fun events for car fans and families alike.

Born in Athens, Tenn., Coker worked for his father Harold, who opened the Coker Tire Company in Chattanooga in 1958, sweeping floors and cleaning wide whitewalls. Having grown up on the family farm, Coker originally planned to become a veterinarian but soon discovered that he actually enjoyed working at the tire store.

“I suddenly realized that selling hot-rod and Model A tires to these guys made them very happy,” he said. “I really got my head into it and started developing some ideas and goals of my own.”

In 1974 he assumed the leadership role in the Coker Family’s BFGoodrich tire dealership.

“Although he couldn’t possibly have known it then, much of what he would do over the next 45 years would help define the collector-car hobby for decades,” said Ken Gross, award-winning journalist and the Concours Chairman. “Finding tires for vintage cars was a problem until Coker began having them made in nearly every size.”

Coker personally has received countless awards in the automotive and hobby world, is a leader in humanitarian efforts, and is an expert on car collecting, restoration and appraisals. He owns more than 180 vintage cars and motorcycles.

Active in the Chattanooga community, he serves on the board of directors of a number of local businesses and is the recipient of the 1995 Chattanooga Area Chamber Small Business Person of the Year award. He enjoys playing his five-string banjo and, most recently, studying blacksmithing. He and his wife Theresa have two children and two grandsons.

“I am very honored to have been selected to be the Grand Marshal of this fabulous event in our great city of Chattanooga,” said Coker. “I’m humbled to be following in the footsteps of a racing legend, Brian Redman. I look forward to working with Brian and the Chattanooga Motorcar Festival team to help elevate this second Festival in the hearts and minds of car fans and families alike.”