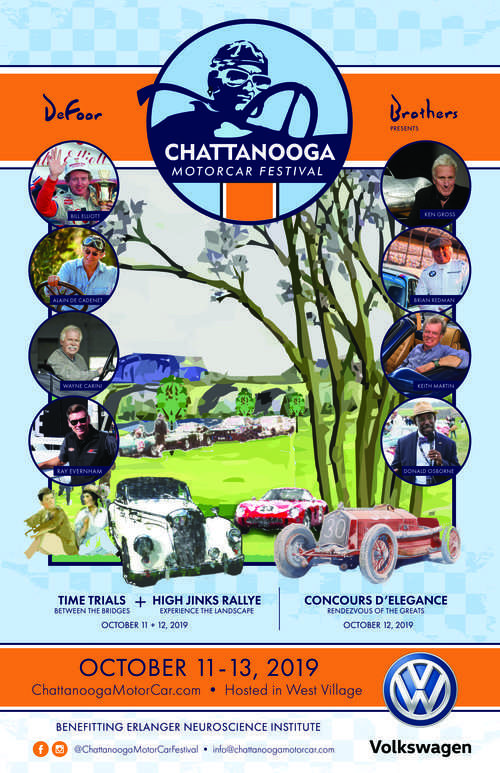 CHATTANOOGA, Tenn. (Aug. 26, 2019) – Stars of the classic car and racing worlds will convene at the inaugural Chattanooga MotorCar Festival, Presented by DeFoor Brothers, Sponsored by Volkswagen of America, Oct. 11-13, 2019.

Notables and celebrities seen on the TV screen, on the race track and in written pages will take part in this first event in downtown Chattanooga on the Tennessee Riverfront. It will benefit Erlanger Neuroscience Institute, the region’s only certified academic Neuroscience Center, which focuses on a collaborative, multidisciplinary approach that enhances quality of care for patients and family.

The Festival resembles its European counterparts by incorporating unique classic car events tailored to the vintage/historic car collector and racer, and the welcoming hospitality that is the trademark of the American South. It includes Time Trials Between the Bridges, Rendezvous of the Greats Concours d’Elegance and a High Jinks Rallye.

The dignitaries lending their expertise include:

Jim Pace, an IMSA GTU champion and overall winner at the 24 Hours of Daytona and the 12 Hours of Sebring, will be the Chairman of the Time Trials at the Festival. He’s competed all over the world and is a consultant to the Festival. CLICK HERE FOR IMAGE (photo credit: Mitchell Hartley)

Alain de Cadenet, Formula 1 and Endurance racer and TV commentator, will be the Time Trials announcer. He has constructed his own racing cars, has hosted television and commentary shows on auto racing and classic cars, including the show, “Victory by Design.” CLICK HERE FOR IMAGE (photo courtesy of Alain de Cadenet)

Bill Rothermel, an M.C. at numerous Concours around the country, and a judge at other significant Concours, will act as the Rendezvous of the Greats announcer. He’s M.C.’d at the Boca Raton (Fla.) Concours, The Elegance in Hershey, Pa., among others, and has judged at the Amelia Island (Fla.) Concours, the Classic Sports Sunday at Mar-a-Lago in Palm Beach, Fla., and many more. As a freelance automotive writer, his work has appeared in publications internationally. CLICK HERE FOR IMAGE (photo courtesy of Bill Rothermel)

Chief Judge for the Festival’s Concours will be Mike Tillson, founder and chairman of the Radnor Hunt (Pa.) Concours d’Elegance and Chief Judge at the Carmel (Calif.) Concours on the Avenue. He’s a former race-car driver in the World Endurance Championship, SCCA and IMSA. For four decades he’s owned a sales, service and restoration shop specializing in high-performance European cars.CLICK HERE FOR IMAGE (photo courtesy of Mike Tillson)

Ken Gross, award-winning automotive journalist, will be the Concours Committee Chairman, helping select the exotic and significant cars eligible for the Concours. Gross has written for Playboy, Popular Mechanics, The Robb Report, AutoWeek, Hemmings, has authored more than a dozen books, and written a 12-episode, historic car series for TV, “Behind the Headlights.” CLICK HERE FOR IMAGE (photo credit: John Lamm)

Other honored guests featured at the Festival include:

Burt Levy, race-car driver and author of “The Last Open Road” series of motoring novels of the 1950s, which have become cult classics on the motorsports and collector-car scenes. CLICK HERE FOR IMAGE (photo courtesy of Burt Levy/Dodge Viper SRT program)

“We are so proud to have the creme de la creme of the car and racing worlds be the brain trust of our first Chattanooga MotorCar Festival,” said Byron DeFoor, event founder. “The talent, knowledge and expertise these industry giants bring to this inaugural event is mind-boggling. We are grateful for their time and support.”

About the Chattanooga MotorCar Festival, Presented by DeFoor Brothers, Sponsored by Volkswagen of America:

The 2019 Chattanooga MotorCar Festival is an inaugural multi-day event, incorporating the style of its European counterparts by holding unique classic car events tailored to the vintage/historic car collector and racer, and the welcoming hospitality that is the trademark of the American South. It includes Time Trials, a Concours d’Elegance, a Rallye and family activities. Hosted by Fifty Plus Racing Foundation, Inc., a 501(c)(3) organization, CMCF benefits Chattanooga Erlanger Neuroscience Institute, the region’s only certified academic Neuroscience Center.